Decommissioning of a significant amount of utility equipment, primarily in the Town of North Hempstead portion of the Glenwood Landing Waterfront, is apparently imminent, with devastating tax implications for residents of the North Shore School District.

The school district currently receives more than $14 million in taxes from utility properties.

At a meeting last August with Glen Head / Glenwood Civic Council Board Members, New York State Senator Carl Marcellino said he would introduce a bill requiring that the tax cut associated with decommissioning be phased in gradually over 10 years. The cut reduces the tax burden on the utility properties and increases it on residential properties.

Senator Marcellino introduced the bill (S5872-2011) on August 17. It was referred to the rules committee upon introduction and to the local government committee on January 4. On March 16 of this year Michele Schimel and William Boyland introduced a corresponding bill in the Assembly (A9577-2011) cosponsored by Mike Montesano, Ellen Jaffee, Andrew Raia, Peter Rivera, and Samuel Roberts; it was referred to real property taxation.

According to the Legislative Action Committee appointed by the North Shore School District School Board, the phase-in, along with payments in lieu of taxes (PILOTs),  will help mitigate the crushing effect that an abrupt termination of of utility tax revenue would have on residents.

Just print the document, which contains four separate letters; sign and date each letter; insert each letter into an envelope addressed to the appropriate elected official; and mail. According to North Shore School District School Board President Carolyn Genovesi, more than 1,000 letters have been generated so far. But more are needed.

"It is imperative that state representatives hear from more constituents in the next few weeks if we want them to enact legislation that can deliver timely relief," Ms. Genovesi said in a recent email message sent to community groups. "Our state representatives are the only ones who have have the power and ability to relieve the immediate tax burden that will result from the partial decommissioning of the LIPA plant."

In March, as the first round of letters flooded the capitol, members of the school board visited Albany to make the case for the phase-in. And in January, Ms. Genovesi testified at a joint New York State Legislature Fiscal Committee budget hearing.

Thanks to a panel of federal judges, Glen Head and Glenwood Landing have been incorporated into a compact, contiguous congressional district, still known as New York State Congressional District 3, that respects the geographic integrity and cultural history of the area.

The new congressional district line begins in northeastern Queens and extends along the north shore through the Town of Huntington. The southern boundary stops roughly at the Long Island Expressway. Previously, New York State Congressional District 3 included sections of the north and south shores connected by a narrow corridor.

Congressional, assembly, and state senate lines are drawn by the New York State Legislature every 10 years based on the most recent census. In recent decades, many of these districts have assumed strange, irregular shapes that isolate communities with mutual histories and common interests, diluting their influence and making it more difficult for them to influence policy.

This year, the court stepped in to impose congressional district lines when the New York State Legislature was unable to conclude the process. The court-imposed map ignores the residences of incumbents, was completed in under three weeks, and has been praised by good government groups.

The New York State Legislature receives recommendations for how district lines should be drawn from the New York State Legislative Task Force on Demographic Research and Reapportionment (LATFOR). This winter, the Civic Council of Glen Head and Glenwood Landing attended a LATFOR meeting to express support for compact, contiguous districts that make geographic and historic sense.

Posted by Patrice Benneward at 11:50 PM No comments: 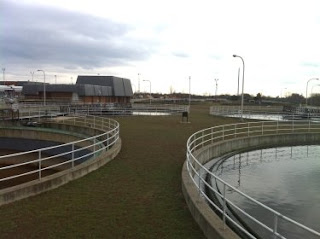 The Nassau County Legislature will soon consider two bills that would ban hydrofracking waste at the county's four sewage treatment plants. Waste from hydrofracking is notoriously toxic and difficult to treat. In September 2011, a report issued by the New York State Department of Environmental Conservation identified as potential treatment sites county-owned facilities at Glen Cove on the north shore and Bay Park, Cedar Creek, and Inwood on the south shore.

Representatives of the Nassau County Coalition of Civic Associations and others recently appeared before the county legislature to comment on the challenges involved in treating hydrofracking waste and the negative impact that the practice could have on Long Island Sound and south shore bays.

According to a press release issued by Legislator Denise Ford, a bill, sponsored by a Republican group that includes Legislator Ford, along with legislators Howard Kopel and Dennis Dunne, is in preparation.

The other bill, sponsored by Democrats Dave Denenberg and Delia DeRiggi-Whitton, along with legislators Kevan Abrahams, Judi Bosworth, Judy Jacobs, Joseph Scannell, Carrié Solages, Robert Troiano, and Wayne Wink, has been introduced, according to a press release issued by Legislator DeRiggi-Whitton.

In a related matter, County Executive Ed Mangano (R) has proposed selling or leasing the county's sewage treatment plants. The $1.3 billion deal would help balance the 2012 and 2013 budgets. The one-time budget fix is included in the 2012 budget and was approved by the legislature's Republican majority in October 2011. In December, the legislature's Rules Committee voted along party lines to contract with Morgan Stanley at a cost of $100,000 per quarter to assist the county in finding a buyer/operator. Morgan Stanley will receive an additional fee of not less than $5 million for any deal  that is made.

The Nassau County Coalition of Civic Associations believes privatization is a one-time, short-sighted budget fix that has been pursued with little opportunity for public input.  According to the coalition, "For investing in the plants, a private company will expect to reap huge profits from our tax dollars. It’s been proven time and time again, locally and all over the country, that once  a profit-driven private entity takes over a revenue-neutral municipal service, fees skyrocket, and our environment and every resident suffers." The result is a back-door means of increasing taxes that simultaneously removes government and its elected officials from accountability—effects that often last for decades, even generations.

The Nassau County Coalition of Civic Associations has prepared a petition aimed at stopping the sale or lease of Nassau County sewage treatment facilities.

The coalition was recently formed to share information about matters such as privatization of the sewage treatment plants. The Civic Council of Glen Head and Glenwood Landing is in touch with the coalition and has been participating in discussions. The civic council is made up of the civic associations in Glen Head and Glenwood Landing.
Posted by Patrice Benneward at 9:39 PM No comments: