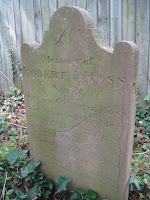 An historic cemetery in Glenwood Landing, where some 30 members of the Mott family are buried, has been landmarked by the Town of North Hempstead. The Motts settled on the eastern shore of Hempstead Harbor some four decades before the Revolutionary War in the communities now known as Glenwood Landing and Roslyn Harbor.

The application for landmark designation was submitted to the town by long-time Glenwood Landing resident Sally Sotirovich. Mrs. Sotirovich's research shows that the cemetery is the resting place of four generations of Motts.

The oldest surviving marker, above, dated 1817, is the gravestone of Robert J. Ross (photo courtesy Mrs. Sotirovich). Robert Ross was the first husband of Abigail Mott, daughter of Glorianna Coles and Revolutionary War veteran Jackson Mott. In 1776, Jackson Mott signed the Association at Cow Neck, which opposed the “oppressive acts” of the British Parliament, and fought in the Battle of Long Island as a member of the Wolver Hollow Militia. He died in 1828 and is buried at the Glenwood Landing site.

Settled in 1681, Glenwood Landing has a rich history of farming, sand mining, milling, oystering, fishing, boat building, and energy supply and production. In the late 1800s and early 1900s, the community was a popular resort destination for celebrities and others, who vacationed at Karatsonyi’s Hotel, below, and similar facilities around Hempstead Harbor (postcard courtesy Gold Coast Public Library). 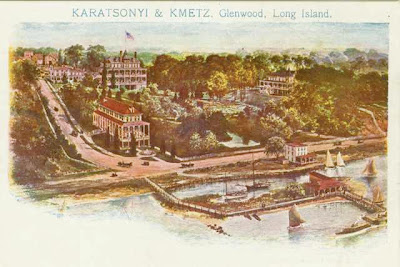 According to Mrs. Sotirovich, the cemetery was located on the farm. The first interment appears to have been about 1802. It is probable that Jacob is buried in the cemetery, but no headstone remains. Jackson, the Revolutionary War soldier and Jacob’s son, lived on the north shore of Motts Cove in a house thought to have been built about 1700. He operated two mills, one located near the front entrance of the present-day Swan Club and one on the south side of present-day Scudders Lane opposite Vine Street.

Jackson Mott’s grandson, Stephen Mott, who also is buried in the cemetery, was the captain of the steamship Idlewild, below, which regularly sailed from Peck’s Slip, near the present-day South Street Seaport in lower Manhattan, to Glenwood Landing (photo courtesy Port Washington Public Library). 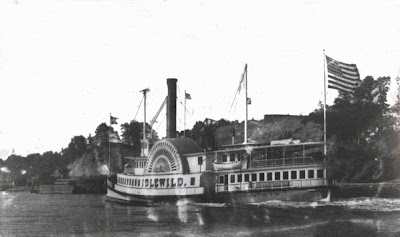 Following a hearing in June conducted by the Town of North Hempstead Historic Landmark Commission, the commission recommended landmark status for the cemetery. On September 14, the Town Board unanimously approved a resolution introduced by Councilman Thomas K. Dwyer designating the cemetery as a landmark.

The cemetery is owned by heirs of the Mott family and is not open to the public. A group of local residents is forming the Friends of Mott Cemetery to help preserve and maintain the cemetery and its gravesites. For more information, contact MottCemetery@aol.com.


Posted by Patrice Benneward at 6:38 PM No comments: