And there is no need: If properly managed, the site is likely to produce a reasonable income stream, and a Friends group is forming to explore the possibility of a partnership with the county. The ad hoc Friends group can be reached at wcbryant@optonline.net.

The Glenwood / Glen Head Civic Association urges neighbors to contact County Executive Tom Suozzi, Legislator Wane Wink, Majority Leader Diane Yatauro, and Minority Leader Peter Schmitt, who can be reached through the Nassau County website or at 1550 Franklin Avenue, NY 11501, to ensure that these and other elected officials know that Cedarmere has a constituency.

A suggested letter is below.

If the site is not properly maintained and does not reopen in a timely fashion, it could revert back to Bryant's heirs. Grants totaling several hundred thousand dollars already have been secured for much of the needed repair and maintenance of the facility.

Located on Bryant Avenue in Roslyn Harbor about a mile north of the Bryant Memorial Library in Roslyn, Cedarmere has great historic significance. Bryant (1794 to 1878) helped to shape the Romantic Movement and wielded a great deal of political influence for most of the 19th century. Indeed, the man and his works are still included in most high school curricula. Recitals, weddings, film and photo shoots, educational events, and other activities have been held at the site in recent years.

I am contacting you to request assurance that Cedarmere, the historic, county-owned museum property in Roslyn Harbor, is properly maintained and reopened in a timely fashion and that the dismantling of exhibits and the removal of priceless artifacts stop pending an explanation of why these items are being removed and when they will be returned to the site.

An ad hoc Friends group recently formed to explore the possibility of a formal partnership with the county to jointly operate the waterfront facility located on Hempstead Harbor. The group is committed to helping the site reach its full potential. I urge you to support such a partnership.

Cedarmere is a rare surviving jewel of the Romantic Movement. As the home of William Cullen Bryant, it was a gathering place for the most influential public figures of the 19th century. Bryant, himself, was a poet, editor of the New York Evening Post (now the New York Post) for more than 50 years, and friend and confidant of Abraham Lincoln. The library in Roslyn and Bryant Avenue, as well as the park on the west side of the main branch of the New York Public Library, are named for him. Today, Bryant and his works are included in many high school liberal arts curricula, including the curricula at Roslyn and North Shore high schools.

Bryant’s heirs donated Cedarmere to the county in 1975, along with $100,000 of seed money and the stipulation that the estate be open to the public and used for educational purposes. The facility finally opened in 1994. Since then Cedarmere has hosted school groups, art classes, recitals, weddings, commercial still photography and film shoots, and other events. With proper management, these activities could grow and produce a reasonable income stream. English, history, and art departments in the Roslyn and North Shore school districts are interested in utilizing the site. Other districts throughout Long Island are likely to share this desire when informed about the treasures Cedarmere holds.

Over the years, the furnace and plumbing in the main house have been replaced, the gardens have been largely restored, exhibits have been created, and some restoration work has been completed. At present, $500,000 is allocated through the hotel tax, Environmental Bond Act, and grants to repair the roof of the main house and continue other restoration projects. There is need for an additional investment of perhaps $500,000. The ad hoc Friends group is prepared to help raise these funds and help market and staff the site. In addition, Benjamin Moore has offered to donate paint.

It appears that the county has put all maintenance and restoration projects at Cedarmere on hold. If Cedarmere is not properly maintained and reopened in a timely fashion it could revert to Bryant’s heirs. This development would be a serious disservice to present and future generations. One cannot help but wonder how the county can justify spending Environmental Bond Act money for new acquisitions—as important and desirable as these acquisitions may be—when Cedarmere and so many other significant cultural sites already dependant on proper county stewardship need attention.

Please support the restoration, proper maintenance, and reopening of this important local and national landmark. Thank you for your consideration.

Posted by Patrice Benneward at 6:08 PM No comments:

The City of Glen Cove will hold a public meeting on Monday, March 30, about the city’s draft master plan and draft generic environmental impact statement (DGEIS). Written comments will be accepted until April 13 and should be addressed to Mayor Ralph V. Suozzi at City Hall, 9 Glen Street, Glen Cove, NY 11542, or rsuozzi@cityofglencoveny.org. The documents are posted on the City of Glen Cove website.
Posted by Patrice Benneward at 6:02 PM No comments:

The Coalition to Save Hempstead Harbor reports that Glen Harbor Partners recently submitted a site plan to the Town of North Hempstead (TNH) for the condominium apartments the company has proposed for the site located south of the Glenwood Landing Power Station on the west side of Shore Road at the western terminus of Scudders Lane (a parcel across the road also is involved). TNH may schedule a site plan meeting as early as April. Information will be posted as it becomes available. A search of this site for previously posted items will retrieve background information about the application, which included rezoning (complete) and an environmental impact statement with public scoping (complete).
Posted by Patrice Benneward at 5:58 PM No comments:

North Shore County Club appears to be seeking a developer to build homes on part—or even all—of the 158-acre golf course property. The main entrance of the club is located on Shore Road. The property spans the Village of Sea Cliff and the hamlets of Glenwood Landing and Glen Head in the Town of Oyster Bay (TOB) and is about equally divided between the two municipalities. TOB rezoned the Glenwood/Glen Head portion of the parcel from quarter-acre residential use to half-acre residential use based on a recommendation in the Glenwood Landing Waterfront Revitalization and Redevelopment Plan completed in 2002. Zoning in the Sea Cliff portion also is half-acre residential.

The property contains may natural features and some structures worthy of preservation. During the waterfront planning process, the public and members of the task force expressed concern about the catastrophic consequences the potential subdivision of the club would produce. The Coalition to Save Hempstead Harbor (CSHH) nominated the property for open space acquisition under the town’s Save Environmental Assets (SEA) bond fund and recently wrote to TOB to restate the request. The Village of Sea Cliff is considering a building moratorium to study possible preservation methods.

The potential development of the club raises concern about the effectiveness of ongoing stormwater improvements at Scudders Pond. Located on the outskirts of the club, the pond collects and filters stormwater runoff before the runoff is discharged into Hempstead Harbor. Proper treatment of the runoff is critical for maintaining and improving water quality in the harbor. Years of highly commendable inter-municipal planning has resulted in several million dollars of grant awards for critical stormwater improvement projects that are or soon will be underway. Development of the club would impact these efforts.

Please consider contacting TOB Supervisor John Venditto, the Town Council, and the SEA Fund III Committee to express concern about the possible development of North Shore Country Club and to request that the town purchase and preserve the property. Town personnel can be emailed through the TOB website or reached via U.S. Mail at Town of Oyster Bay, 54 Audrey Avenue, Oyster Bay, NY 11771-1592. A suggested letter is included below.

I am contacting you express my concern about reports that the North Shore Country Club, a 158-acre parcel that spans the Village of Sea Cliff and the hamlets of Glenwood Landing and Glen Head, may be seeking to develop the property under its current zoning (half-acre residential).

Development of this site would have a catastrophic impact on this community, including the school district, the Scudders Pond watershed, and Hempstead Harbor. In addition, the property contains several buildings and many natural features worthy of preservation. The public, as well as members of the Glenwood Landing Waterfront Revitalization and Redevelopment Plan advisory committee, overwhelmingly expressed such concerns during the planning process held in connection with formulating the waterfront plan.

I urge you to purchase the property for preservation as recreational and/or open space. In addition, please re-post the GWL Waterfront Plan on the town website.

Thank you.
Posted by Patrice Benneward at 5:36 PM 2 comments: 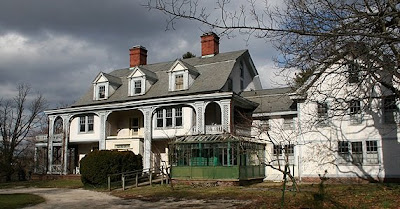 Nassau County has disassembled exhibits and removed priceless artifacts from Cedarmere, the estate of William Cullen Bryant (1794 to 1878) in Roslyn Harbor.
A decision to close the facility appears to have been made separate from and before other closures were announced affecting other County facilities due to the current fiscal crises.
As of this writing, the County’s long-term plans for Cedarmere are unclear. A Friends group is forming to explore the possibility of a public-private partnership to help keep the facility open. Contact information will be posted here when it is available.
Please consider informing County Executive Tom Suozzi, Legislator Wayne Wink, Majority Leader Diane Yatauro, and Minority Leader Peter Schmitt that this important historic property has a strong constituency. Email messages can be sent through the Nassau County website.
Bryant’s heirs donated the estate to the county in 1975 with the stipulation that the property be open to the public and used for educational purposes. In recent years, the facility has been used for growing numbers of school groups, art classes, recitals, weddings, and other events. If the facility is not reopened in a timely fashion, the property could revert back to the heirs.
Bryant was a driving force of the Romantic Movement, editor of the New York Post for half a century, and a confidant of Abraham Lincoln. His estate was a gathering place for the 19th century’s most notable authors, architects, painters, and musicians.
Roslyn’s Bryant Library and Bryant Park, adjacent to the main branch of the New York City Public Library, are named for him. Several hundred thousand dollars from various grant sources have been awarded to continue needed maintenance.
Posted by Patrice Benneward at 1:02 AM No comments: